Team work by designPublished on September 12, 2016

It’s a project nearly two years in the making, but the magic touch of a local design duo has taken a six-bedroom Manotick home to a new level of awesomeness.

The renovation called upon the expertise of Laurie Jarvis from Unique Spaces and Lucie Cadieux from Cadieux Interiors. The designers first met when the homeowners were picking out furniture pieces from Cadieux and brought Laurie into the project for guidance on paint colours and finishes.

With a 20-something-year-old home that needed updating, the clients wanted to give it a fresh aesthetic. They tasked Lucie and Laurie with creating something calming and peaceful that would hold a delicate balance between a traditional look and clean, modern lines.

Their design concept opened up the foyer to make it the central gem of the home, adding new front doors and over-sized tiling that created a majestic entrance to the living room. Custom pieces were chosen for the living room, keeping in mind that everything had to fit the scale and look of the space. Some key pieces include a Sorbonne chair designed by renowned French designer Jacques Garcia from Baker Furniture; plus two pieces designed by Barbara Barry: a custom neutral-weave sofa combined with velvet-trimmed throw pillows, and a round coffee table beautifully finished in pearl with a gentle scooped edge.

Throughout the house, blues and grays, with hints of gold and amethyst, showcase the comforting colour palette developed for wallpaper, fabric and Benjamin Moore paint selections. Custom closets were added to the bedrooms and all the bathrooms were updated with fixtures, customs mirrors, lighting and linens. In addition, new Marquis units replaced the fireplace in the master bedroom and family room.

Working with the client, Laurie chose original artwork from Koyman Galleries, including a magnificent Toller Cranston piece that is a focal point of the dining room. Meanwhile, Lucie tackled some challenging areas, including wall alcoves that she says can be hard to fill. She recommends taking dimensions, being open-minded about what might work, and taking a trial-and-error approach. Don’t be afraid to bring pieces home to see what works.

“A house like this deserves a certain calibre of appointments,” said Laurie. She and Lucie didn’t rest until they found just the right piece for each space.

A combination of Lucie’s knowledge of the marketplace and her national and international shopping trips to source the latest trends helped a great deal. “I figure out what’s on the market right now and what we can get our hands on that fits our needs,” said Lucie. “We have so many great manufacturers that we work with, so we can go out there and choose what’s best for the client.”

The team’s design work extended to the outdoor living space, which beautifully expands the indoor entertaining area. The concrete flooring was painted in a rich, earthy tone to flow better with the decking, and existing furniture pieces were re-upholstered, which Lucie says often makes more sense than buying new. The indoor-outdoor room was appointed with fresh pieces in umbrella fabric, a new table and area rug, updated lighting, a Heat & Glo fireplace, and a television entertainment system.

The spacious lower floor now flows from two bedrooms created for the teens in the family, through to a games room, gym and seating areas for R&R. It culminates in a home theatre with bar and red-carpet accents for the full Hollywood experience.

Laurie and Lucie made smart use of the structural bones and on-site materials that could be incorporated into the new look. The still-gleaming wood floors were kept, as were some hints of the original Mediterranean tile. The overall look has been lightened up, modernized and, in some cases, the existing furniture only needed to be recovered and refinished with more neutral tones.

The collaboration between the two designers turned out to be a real winner. “When you work on a major project like this over a period of time, it’s nice to have a second opinion to keep your perspective fresh,” said Laurie. Lucie agreed, saying, “It definitely increased our creativity and really pushed us to think in new directions.”

Their hard work came together beautifully and the result is a gorgeous look and a happy client. The overall design is both upscale and carefully curated, while retaining the welcoming warmth of a perfect family home. 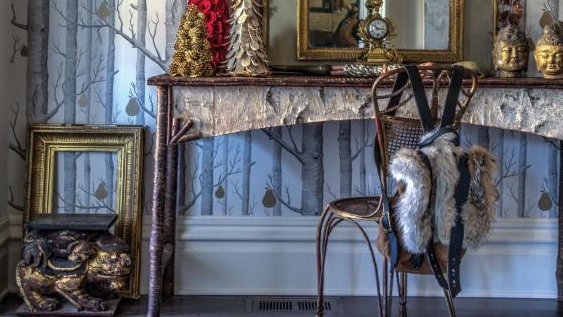