Easy summer living includes casual food with a fun factor! We found three places that should be added to your “worth-taking-a-drive-for” list.

What began last summer as a cute little country-style spot, offering ice cream with all the toppings plus gourmet coffee and tea, has undergone a delicious transformation, making it a donut lover’s paradise as well. A slow winter for ice cream sales led to offering artisanal donuts from local bakeries, bringing something different and special to the bustling village of Manotick. The popularity of this new element prompted Mimi’s co-owner, Emily, to start making donuts in-house. It’s proven to be a great addition, much to the delight of both customers and her business partner and lifelong friend Dave, who also owns Fitz’s Fries, located next door.

Although Mimi’s has only been offering its new donut line for a few months, the shop is just barely keeping up with demand. They’ve implemented a new pre-order program for people who want specific flavours or their fabulous cronuts, and a kitchen expansion is in the works to increase daily production. Staples include classic cinnamon-sugar donuts to fritters with fresh fruit and even a decadent chocolate-cheesecake donut.

It’s a family affair at Meatings, an authentic smokehouse and barbecue joint co-owned by brothers Mat and Joey Flosse, along with business partner Carol Hunt. The company that began as a catering endeavour six years ago has grown to include a small restaurant on St. Joseph Boulevard in Orleans. High demand has them planning an expansion already after just 18 months.

Meatings’ rustic décor is an ideal match for the food, with seats for 20 at live-edge wood communal tables or high top counters with fire-engine red barstools. There’s even a little south-facing patio out front. Chalkboard walls tell the Meatings story, and customers’ graffiti is a fun adornment to the barnboard panelling and exposed brick.

As for the food, meat naturally takes centre stage on their extensive menu, with melt-in-your mouth brisket, tender ribs and tasty tacos among the most popular fare. For sides, the cornbread, mac ‘n cheese and smoked baked beans are must-tries. And vegans aren’t forgotten either, thanks to Meatings’ seasoned, smoked, sauced and shredded jackfruit that has all the flavour and texture of pulled pork while remaining absolutely meat-free. As if all this doesn’t sound tempting enough, Ottawa-based John Thomson, Canada’s national barbeque champion, has declared that Meatings serves up the best restaurant ribs in Canada.

Hot tip: Pre-order via the new Meatings Barbecue iOS app then you can pick up your meal and head to Petrie Island, a quick 10 minute drive away.

The third jewel in the Stella Luna crown has spent the past few months being buffed and shined for its opening this spring. A Victorian brick house with gingerbread trim in Merrickville first caught the eye of Tammy and Alessandro Guiliani many years ago on frequent motorcycle trips through the area—a romantic echo of their three-day whirlwind Italian courtship in the 1980s. Transforming a heritage 1890s building into a gelateria is the fulfillment of their longstanding dream to own a quaint village café and makes a perfect addition to the town’s eclectic, appealing collection of restaurants and artisanal craft boutiques.

The shop’s vintage, farmhouse vibe is as welcoming as the staff, including Tammy and Alessandro’s daughter Erica, who runs the shop. While Stella Luna is famous for its internationally award-winning gelato, also on offer are delectable crepes and waffles, gourmet panini and an appetizing selection of salads and soups, making it the ideal stop for breakfast, brunch, lunch or a quick refuelling treat. The plan is to add a dinner menu next year as well as a wine bar and craft beer to the café, so visitors can settle in outdoors to enjoy their lovely perennial gardens or stroll down to the water’s edge in this picturesque town where time seems to stand still.

Hot tip: While Merrickville is a favoured destination for cyclists and day-tripping drivers, Stella Luna’s new location is perfect for boaters too, as it’s just steps away from the Rideau Canal lock station. 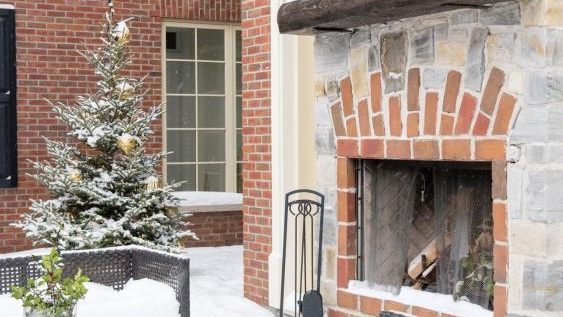